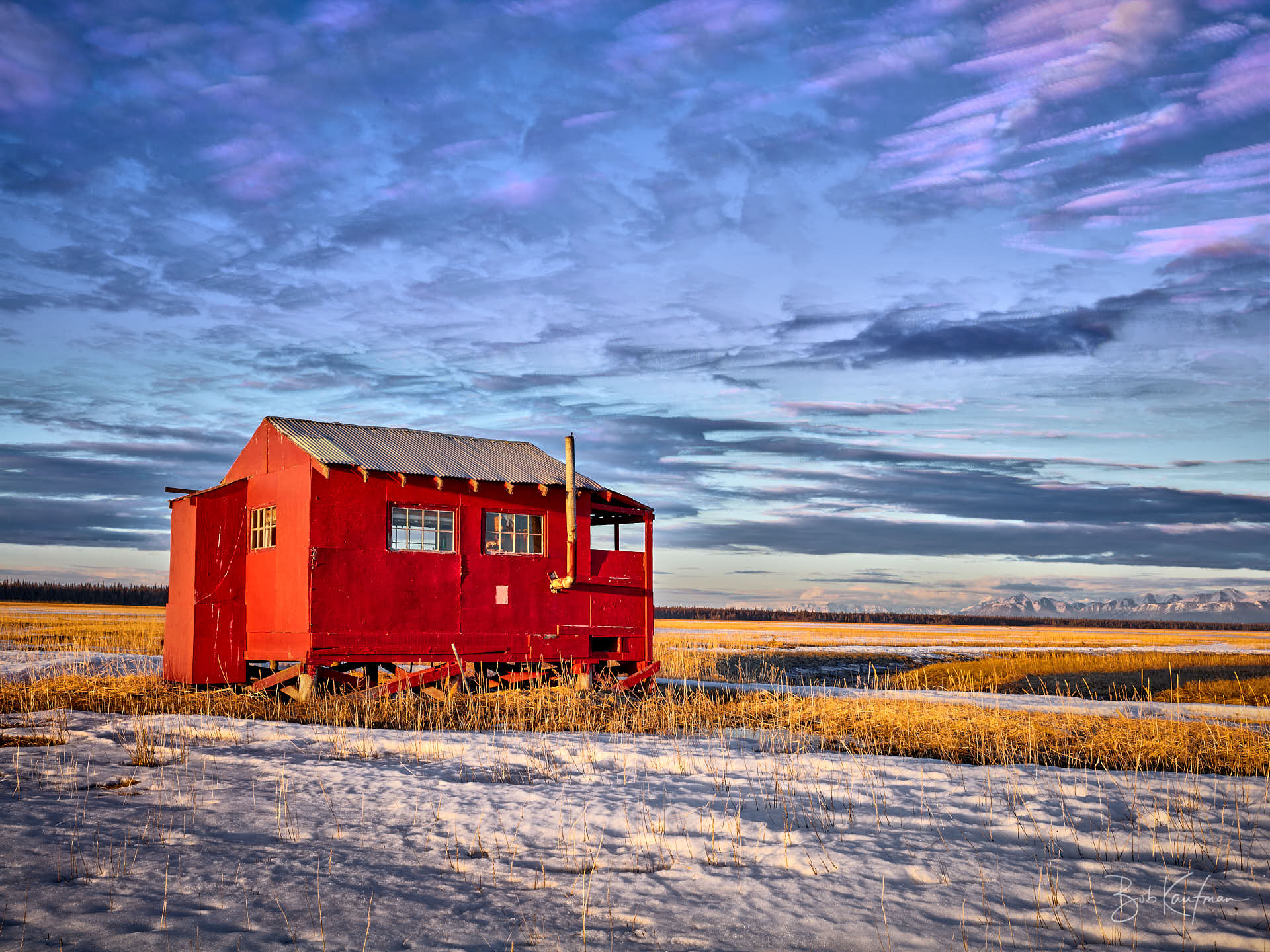 I learned about a photographer named Deborah Sandidge who does stunning work with an artistic technique she calls wind-painted clouds. What most struck me was her images of lifeguard shacks against a painted sky.

The formal name for the technique is time lapse stacking. Traditional time lapses show the movement of clouds through a long exposure. In a time lapse stack, you take multiple short exposures, then stack them on top of each other in post processing to show small incremental cloud movements that occur in each successive exposure.

I was inspired to try this. Of course, we don’t have too many lifeguard shacks in Alaska. But I thought of some shacks that just might work. I flew about ten minutes from Anchorage across Knik Arm to the Susitna Duck Flats, a miles wide tidal plain, found the most colorful shack I could, and set up for my shot.

I waited until the setting sun lit the duck shack bright red and the sky with a tinge of purple. I’m excited about the result. Next time, I will take more exposures with a longer delay between them.

As the sun was setting, I made another image of the shack facing West towards Mt. Susitna. I am naming this image “Outpost on Susitna Flats” and wrote the following caption: 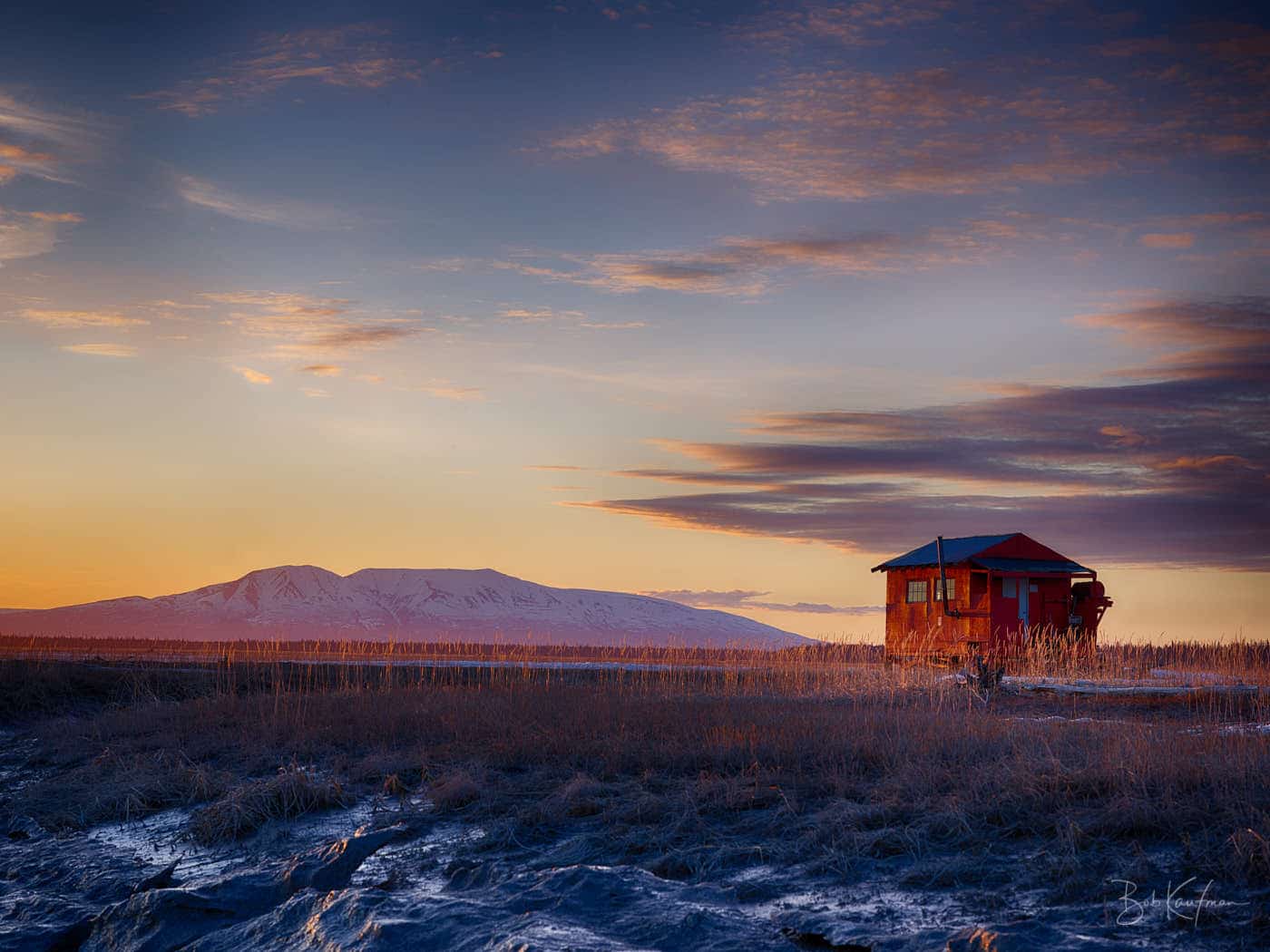 Other Images From the Evening 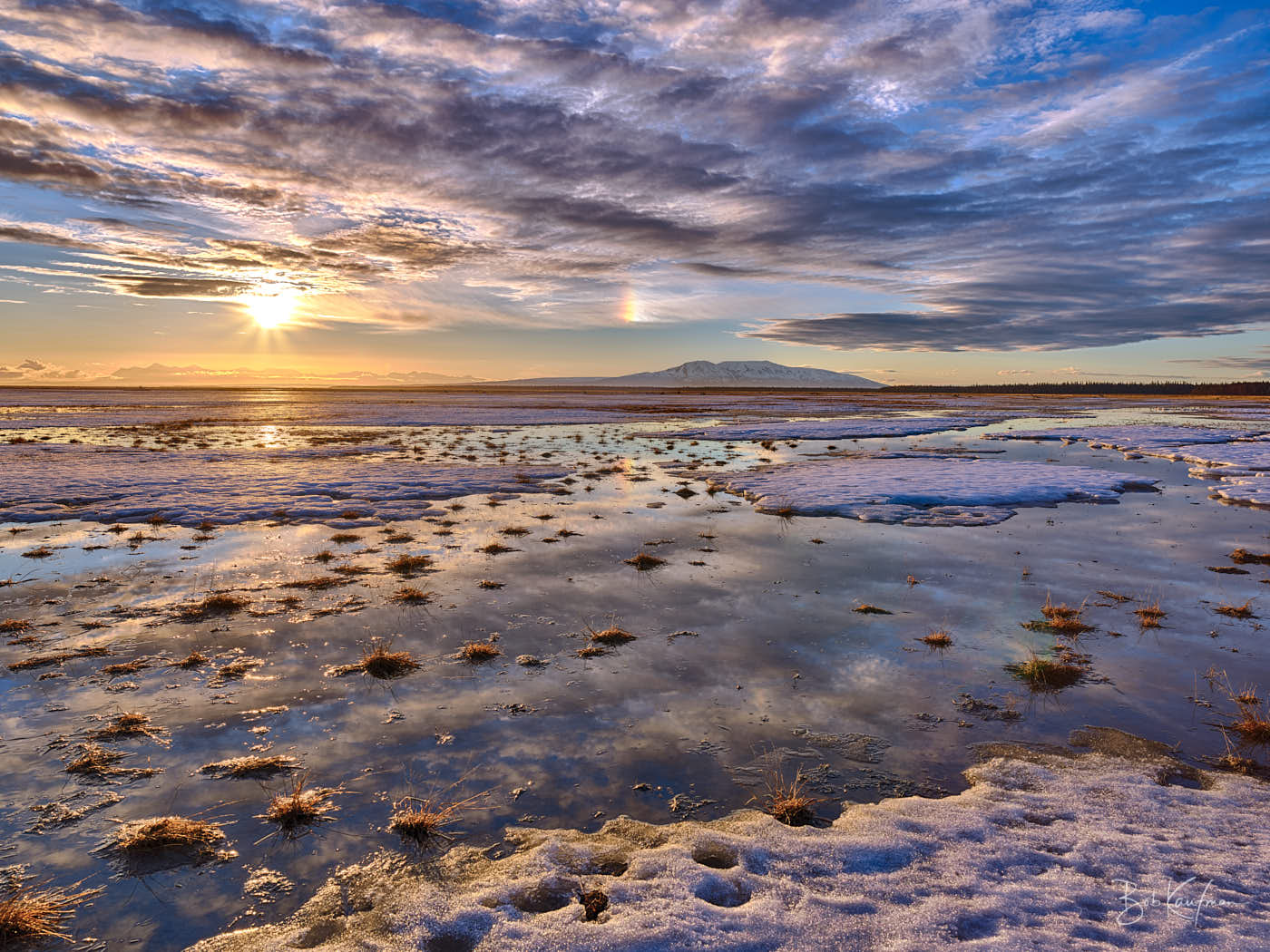 Though Anchorage is just 10 miles to my back, miles and miles of open country beckon to the West. The bright rainbow object is called a "sun dog," also known as a parhelion. This startling optical sight occurs when sunlight gets refracted through cirrus clouds, where uncounted billions of hexagonal ice crystals behave like tiny prisms. 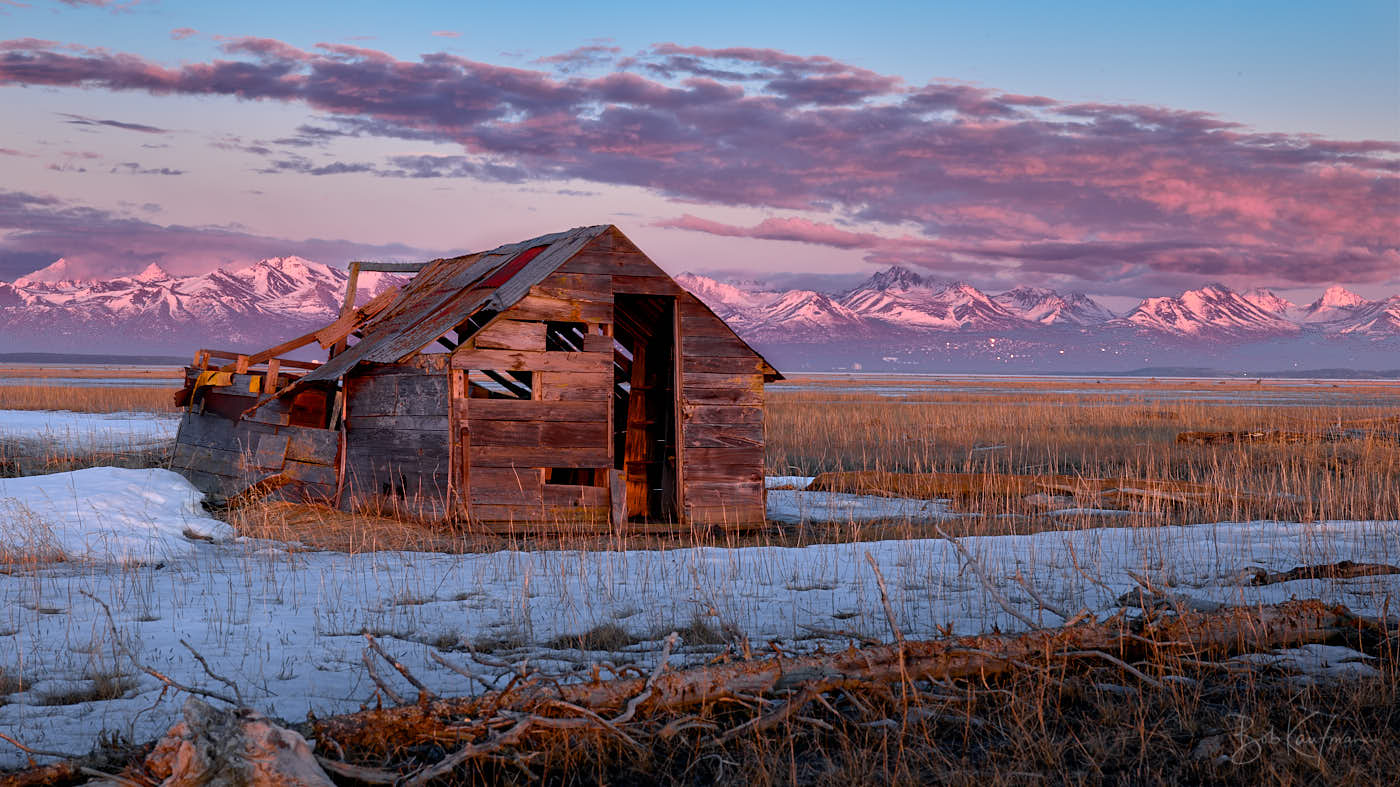 A nearby cabin. More character, less color. Anchorage can be seen gleaming just to the right of the cabin. 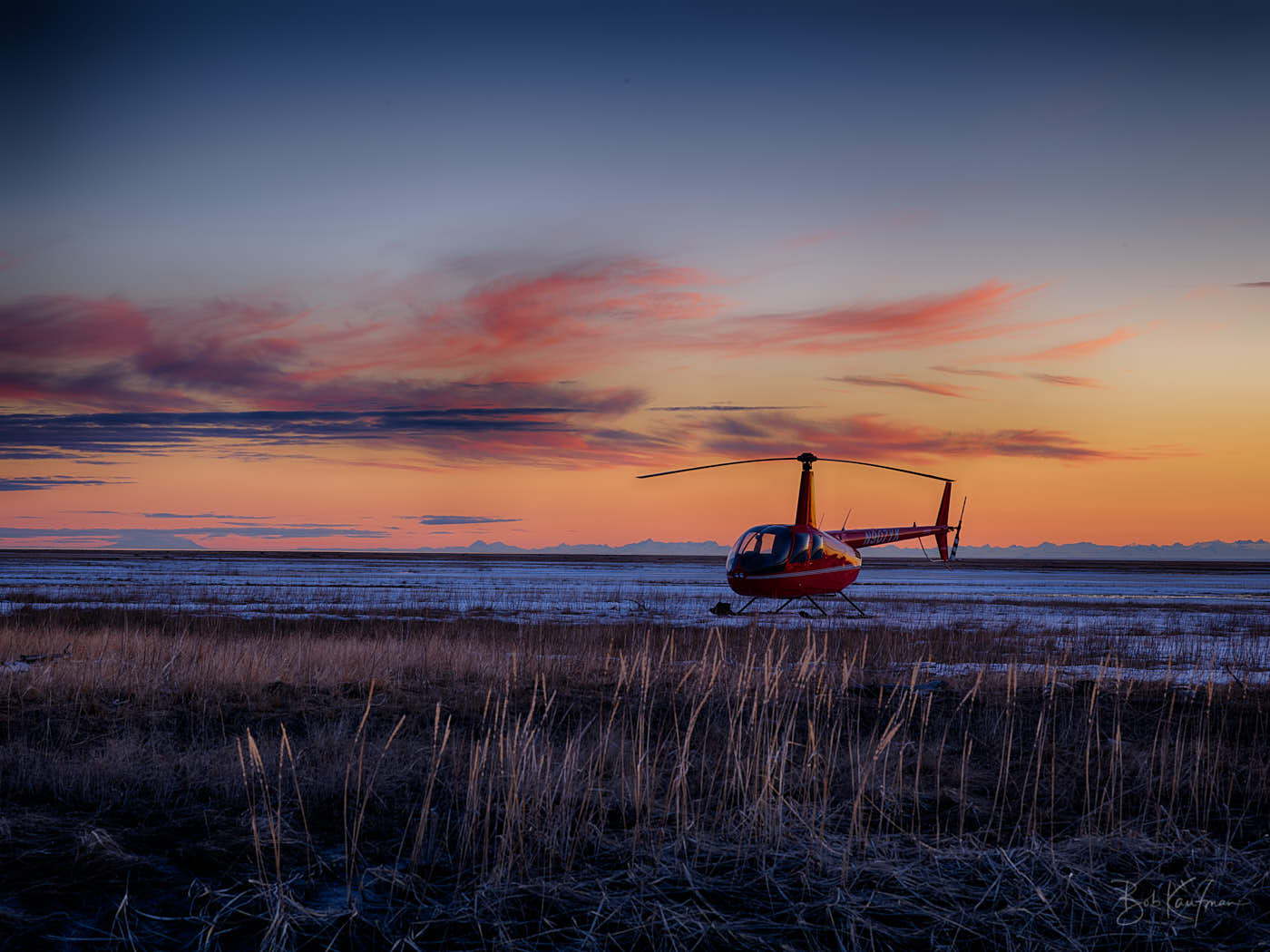 The loyal bird patiently bides its time while the photographer works :)

Panorama from Mt. Susitna on the left (West) to the Kenai Peninsula on the right. Use your mouse or finger to pan left or right.