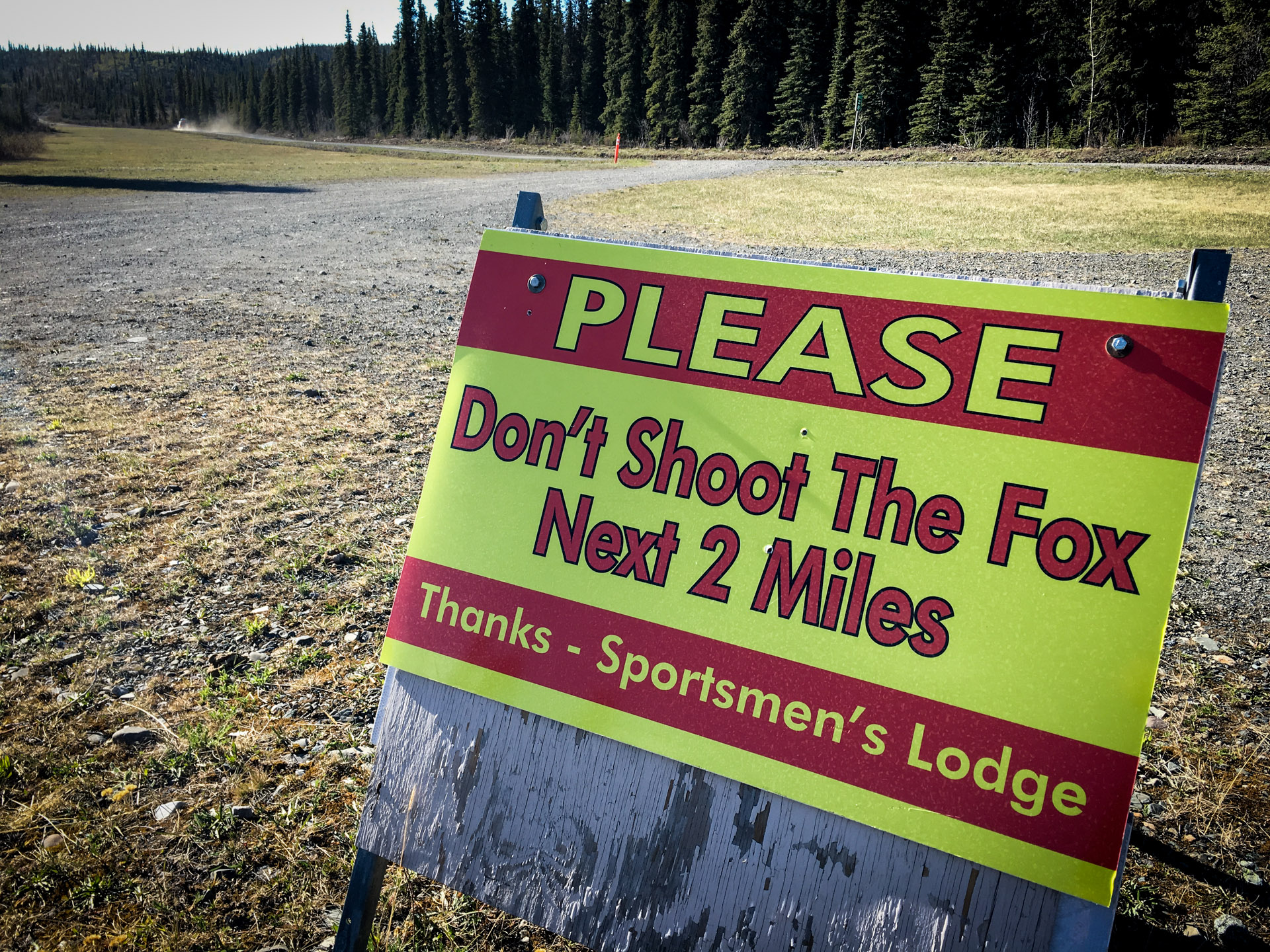 Roadside signs are one of the first things you notice when you travel to a new place. They can tell you so much about a place. They fascinated me in my early years in Alaska, and I often stopped to photograph them.

The best photo you never take—the one that looms in your mind for decades—is the one you missed because you didn’t have your camera with you. (That actually happened in the days before smartphones.)

For me, it was a sign I saw while jogging in the summer of 1992 in Eagle, Alaska.

I was in Eagle for only a couple hours to drop off my car. I was doing a solo kayak trip from Dawson to Eagle. I had previously stashed my kayak and camping gear 100 miles upriver in Dawson City, Yukon, then driven many hours to Eagle, where I was going to catch the Yukon Queen boat back to Dawson to begin my trip. (The Yukon Queen was a thunderingly loud catamaran that ran daily between the two towns during those years.)

With my trusted Nikon FM2 in the early days

I went for a quick jog before catching the boat. Climbing the road outside Eagle, I saw a sign I could not believe. Fading, and hand-painted, it spanned the width of a house and read, “The National Park Service, and Anyone Who Works For Them, Is Not Welcome in This Town.”

What hospitality! I had known many Alaskans bitterly opposed The Alaska National Land Conservation Act, or ANILCA. (It was a 1980 law signed by Jimmy Carter his last day in office that either “locked up over 100 million acres of Alaska wilderness” or “set aside irreplaceable parklands for future generations”—depending on how you look at it.) And I knew the Park Service had an office in Eagle. But I was surprised to see such an overt vestige of that earlier fight survive all these years.

Unfortunately, I didn’t have my camera with me. After my jog, I thought about driving back up the hill to make the photograph. But I figured I’d be back in a week after my float trip, and I might just as well do it then.

Self-portrait taken on my solo kayak trip down the Yukon, summer 1992. My main activity on the 5-day float was memorizing Robert Service’s, “Spell of the Yukon.”

After my kayak trip, I went to look for the sign. My memory for place is pretty good, but somehow this time, it seemed to fail me. So I finally knocked on a door, near where I thought I had seen the sign, and asked for help. The woman said, “That sign is gone. We took it down. 12 years is enough.” I said, “Oh no! I really wanted to photograph it. Is there a place I can see it?” She said, “No. We turned it into the wall of our shed. It will never be seen again.”

If anyone knows of a photo of this sign, I would love to see it again. 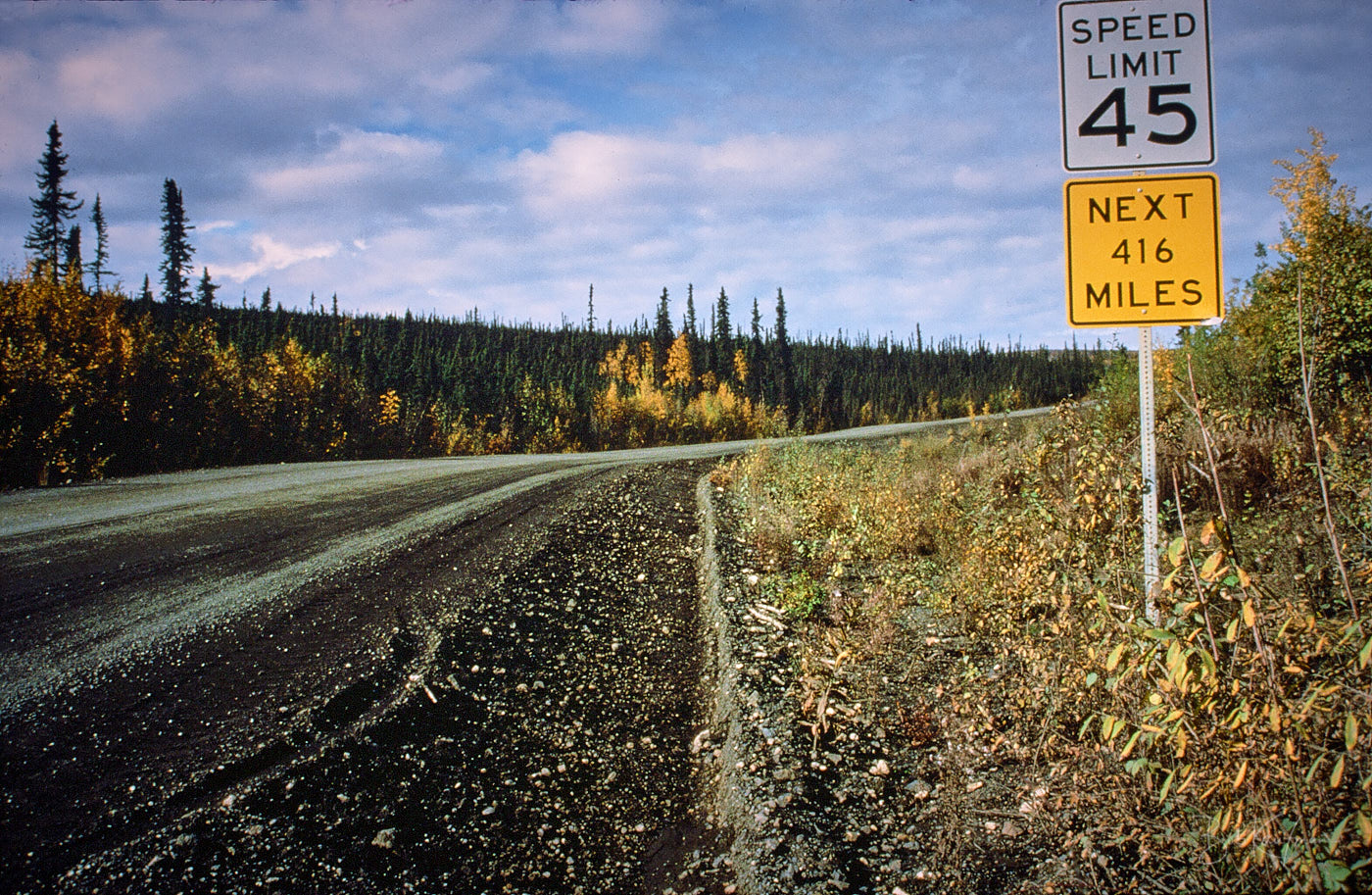 One of my goals was to drive to Prudhoe Bay, almost 1000 miles from Anchorage. To reach Prudhoe, you drive 380 miles of pavement to Fairbanks (the Parks Highway), then another 500 miles of mostly gravel to Prudhoe (the Dalton Highway). 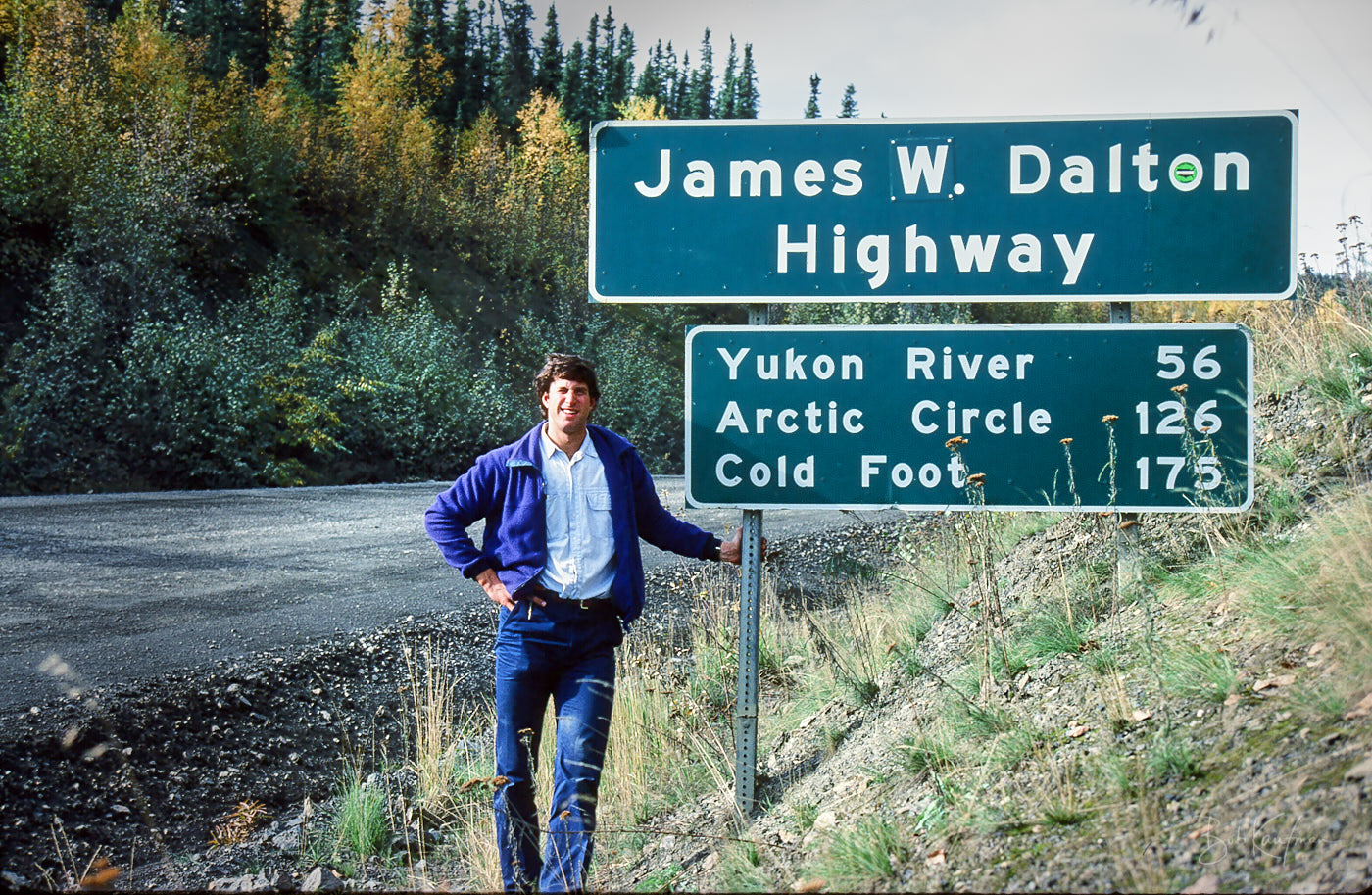 When you drive the Dalton, you know you're on your own.

But in those years, the Dalton (also known as “The Haul Road” because it’s the road truckers use to carry supplies along the pipeline) was closed to private vehicles north of Atigun Pass. There was a manned checkpoint, and you couldn’t get through with a permit.

An insider tipped me off to the fact that that the guard would sleep in the middle of the night. So one summer evening, under the still-light 2am skies, I slipped through. Near Atigun Pass, at 4739 feet, the continental divide between the Arctic Ocean and the Pacific Ocean

I ultimately made it to Prudhoe. But I’m not sure it was for the better. My first glimpse of the massive scale of development led me to a disturbing realization about the journey I had just taken: I had flown north to Anchorage, a city thousands of miles from the population centers of the Lower 48; driven from Anchorage to Fairbanks, the two largest cities in Alaska, with almost nothing in between; and as if that was not far enough away, I had driven another 450 miles north across the empty wilderness of the Brooks Range and North Slope.

And what did I find when I arrived? The very same thing I thought I left behind in the Lower 48: development on a massive scale. The towering rigs and sprawling pipeline complex symbolized for me our nations’ thirst for oil, and at a deeper level, our society’s collective choice of the convenience of the automobile over the preservation of wilderness.

The sign, which I am told no longer exists, symbolized a last bastion of wilderness in between. 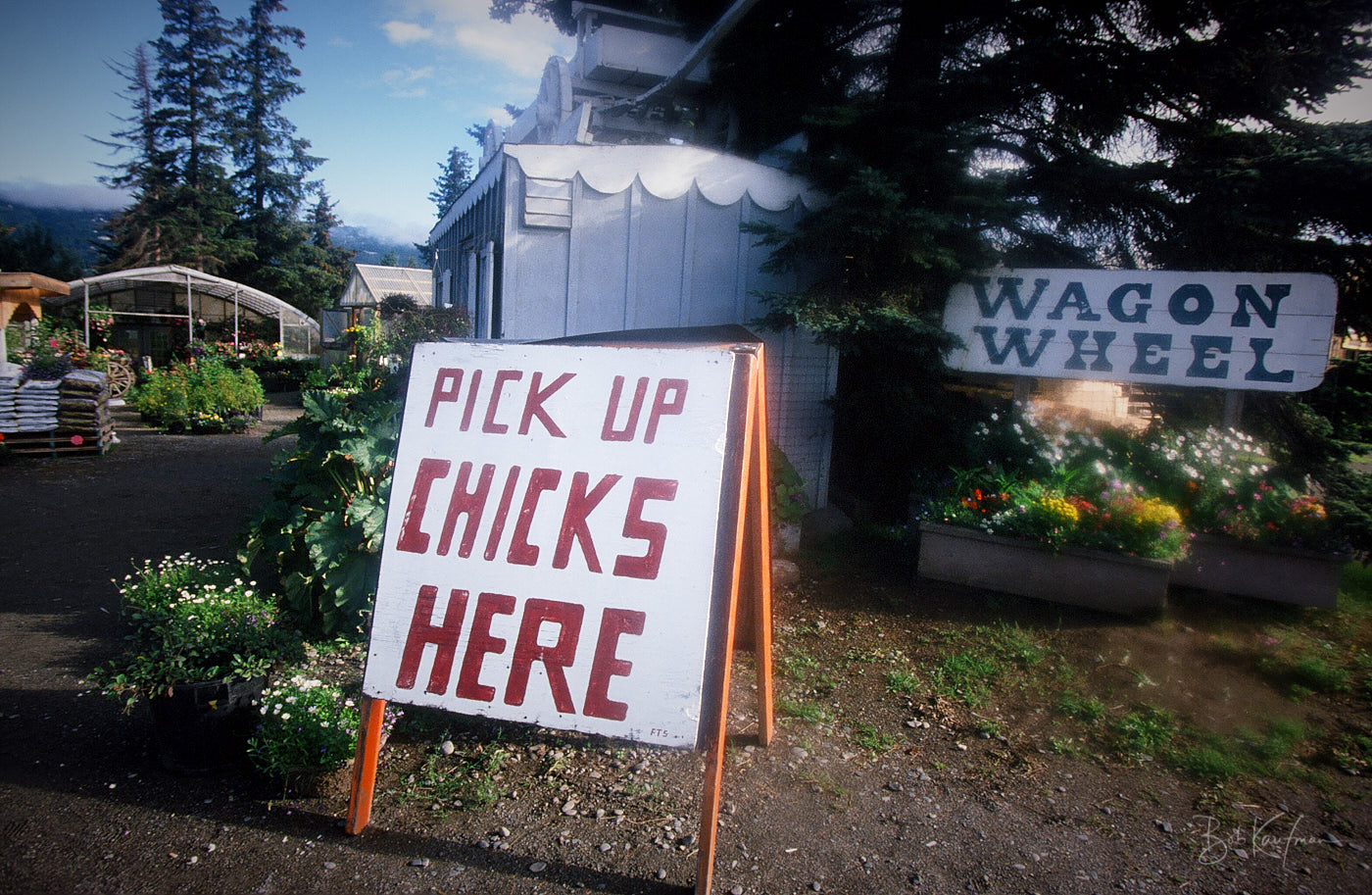 Wiseman Alaska, in the Brooks Range, 1994 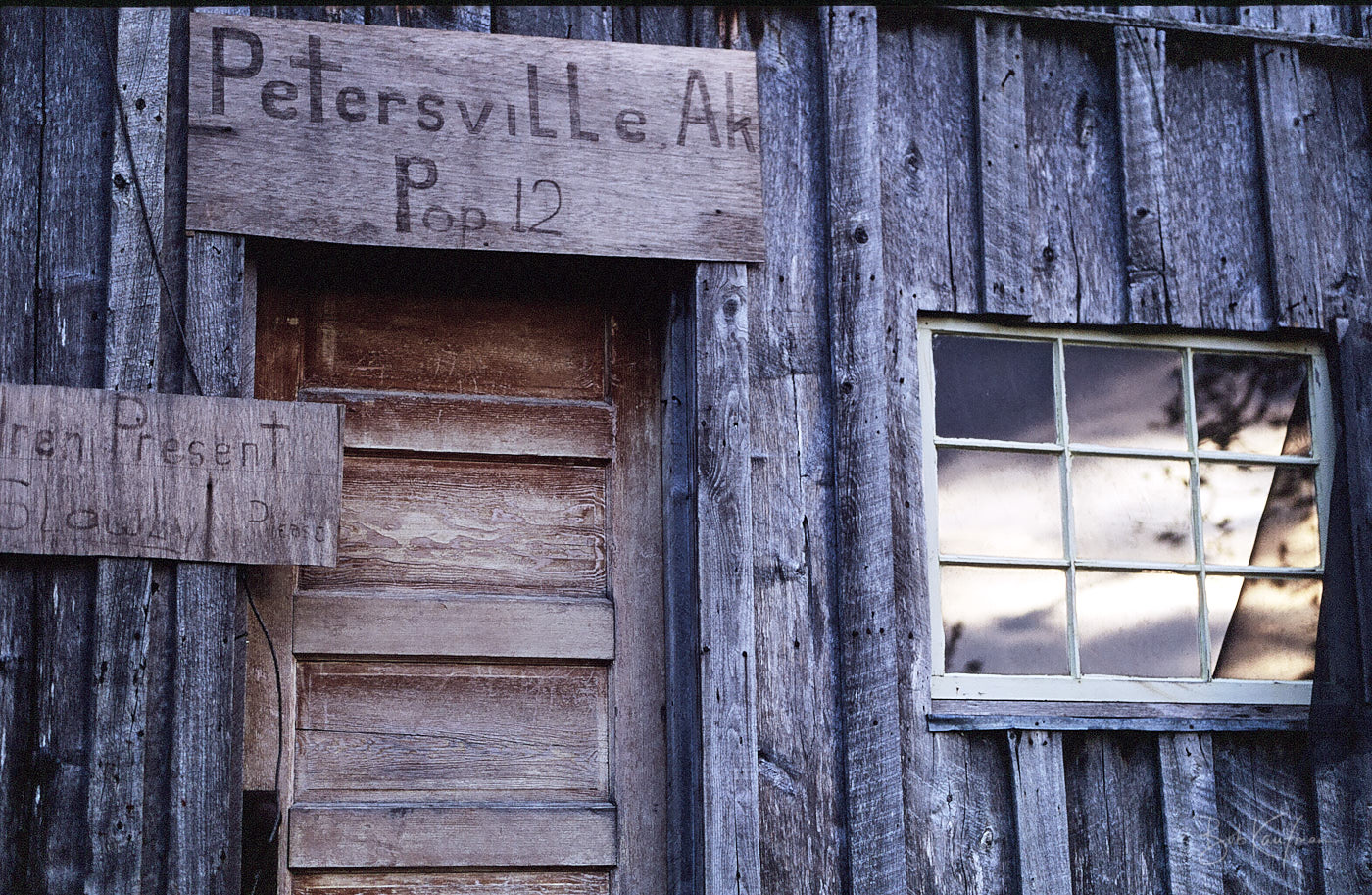 Near the end of the Petersville Road, 1991 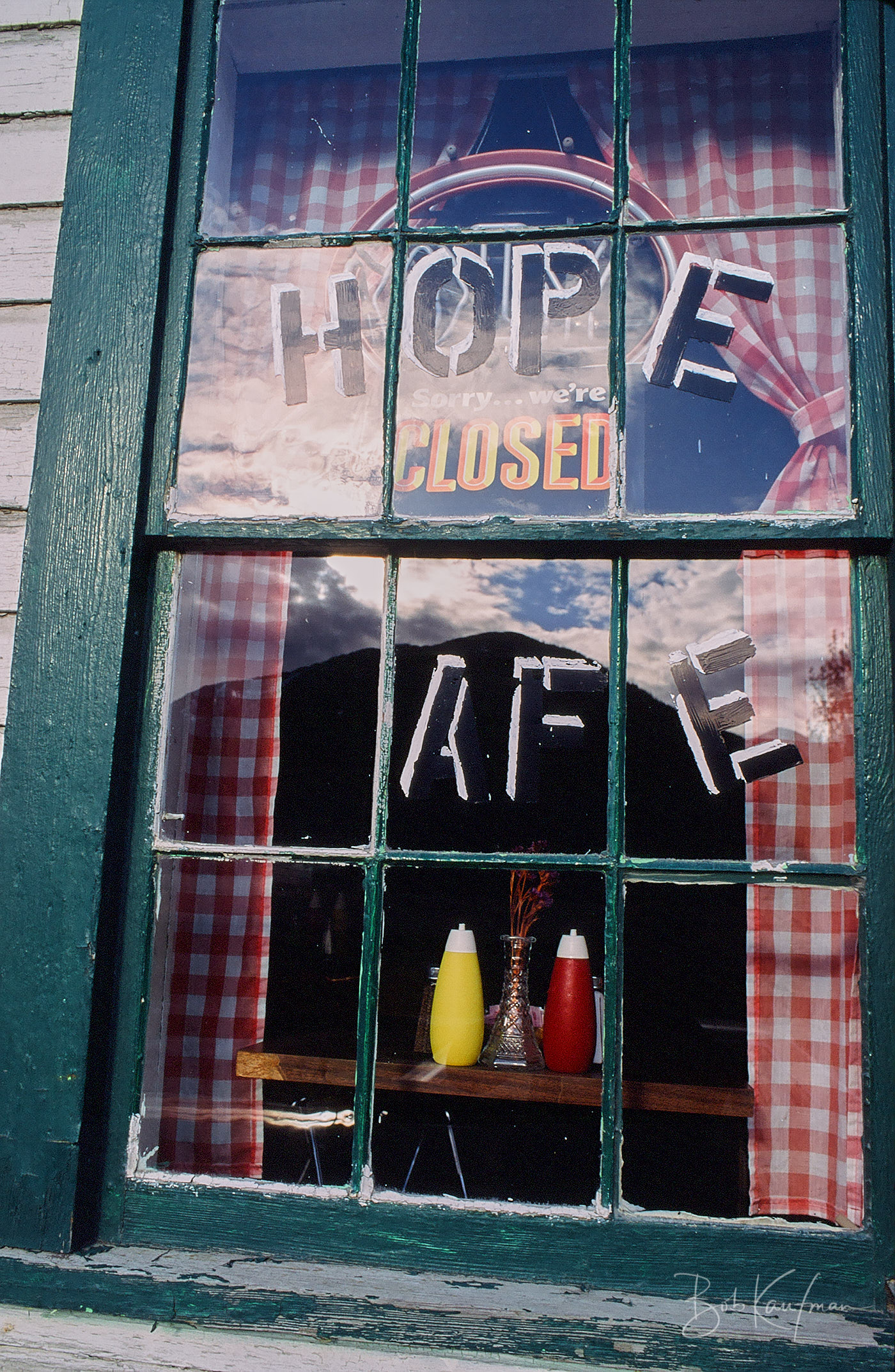 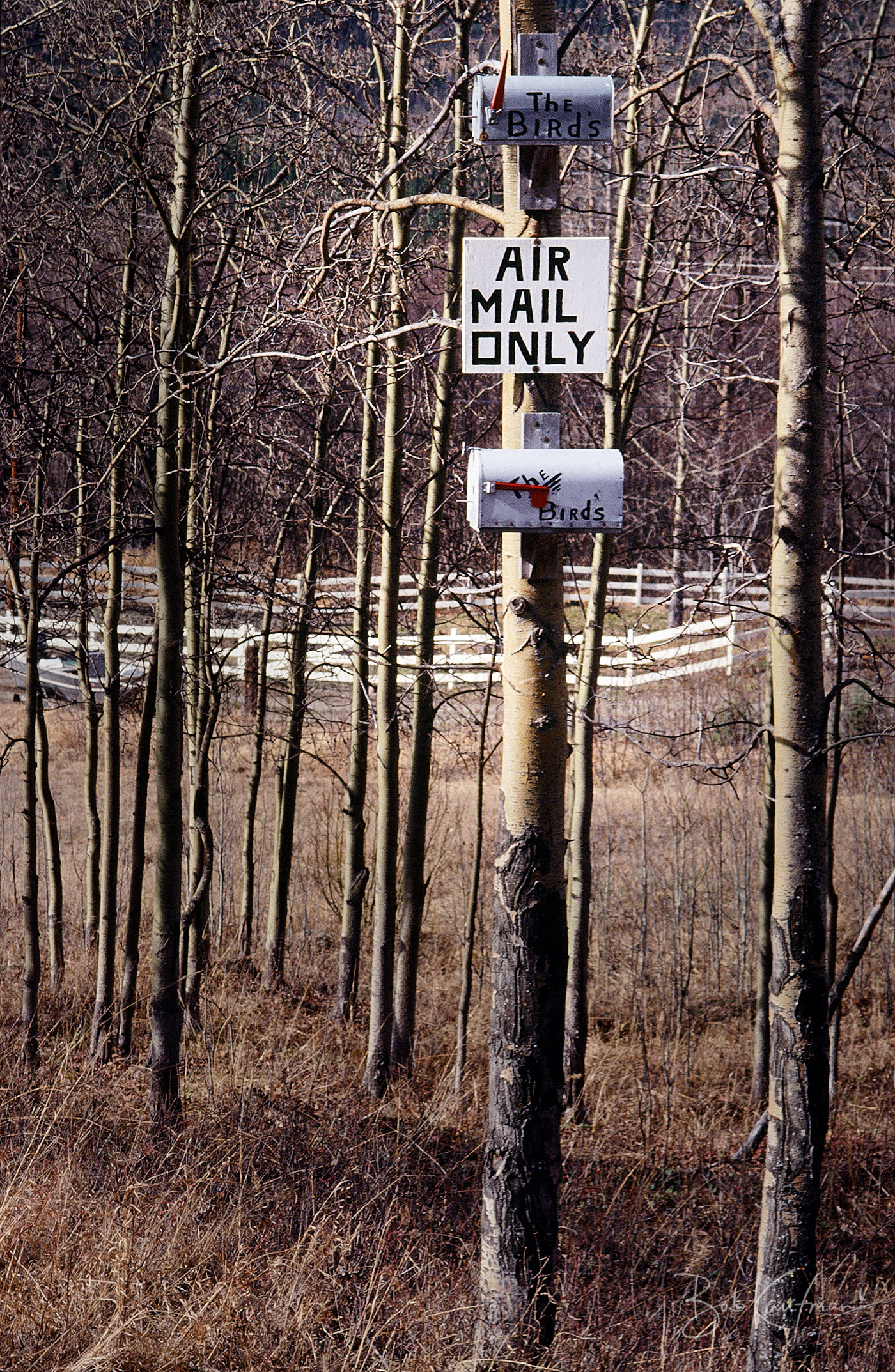 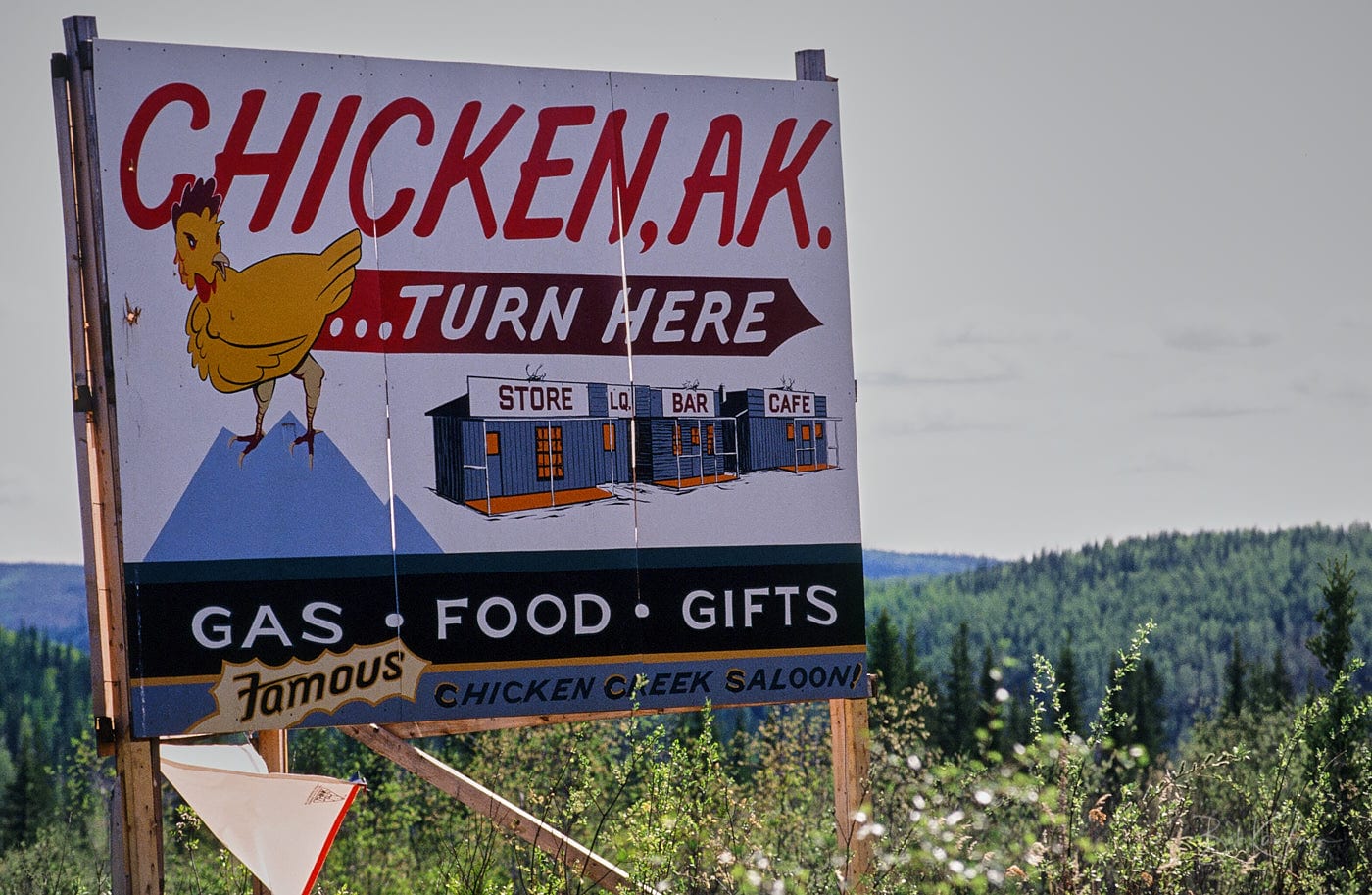 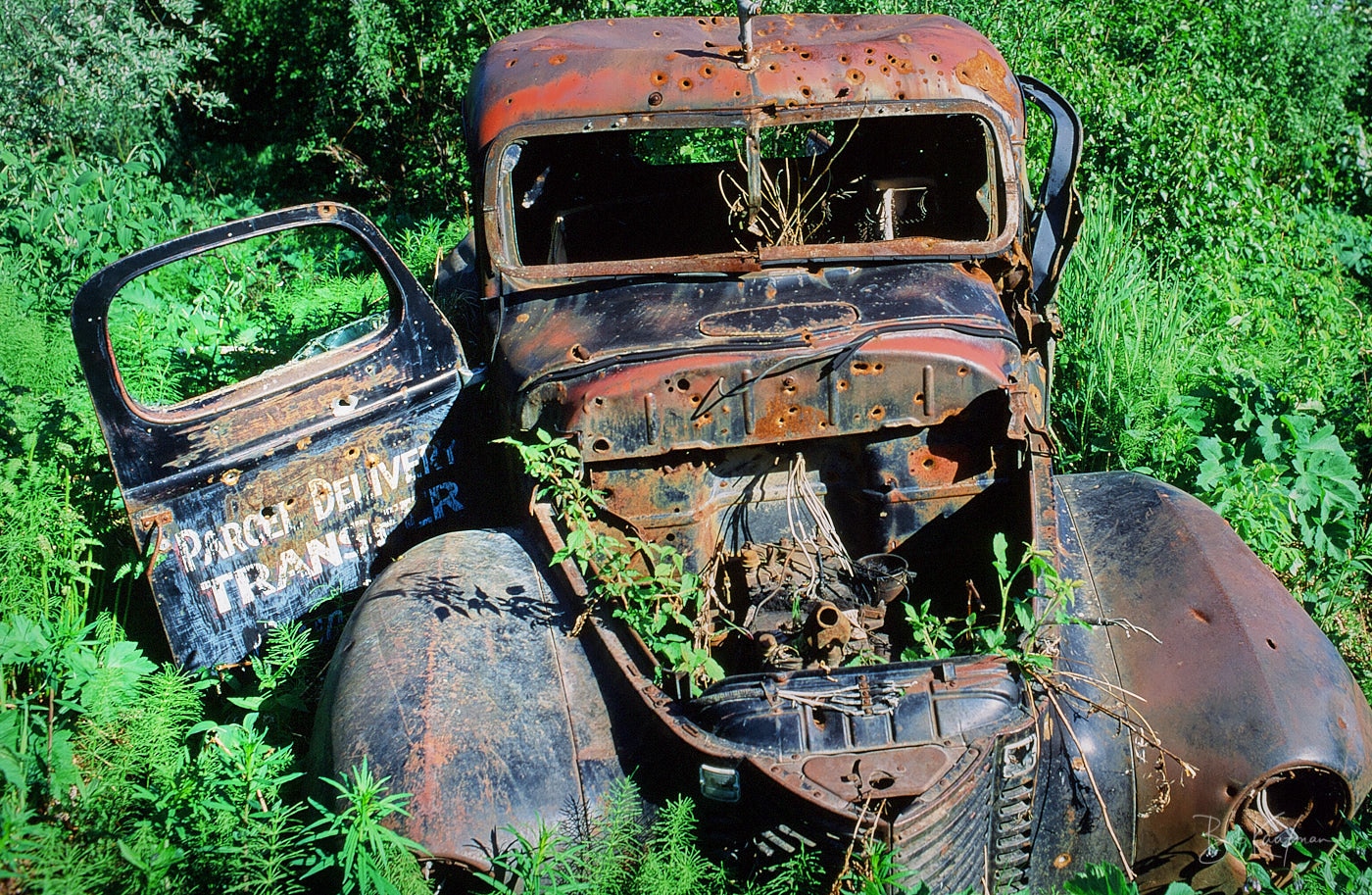 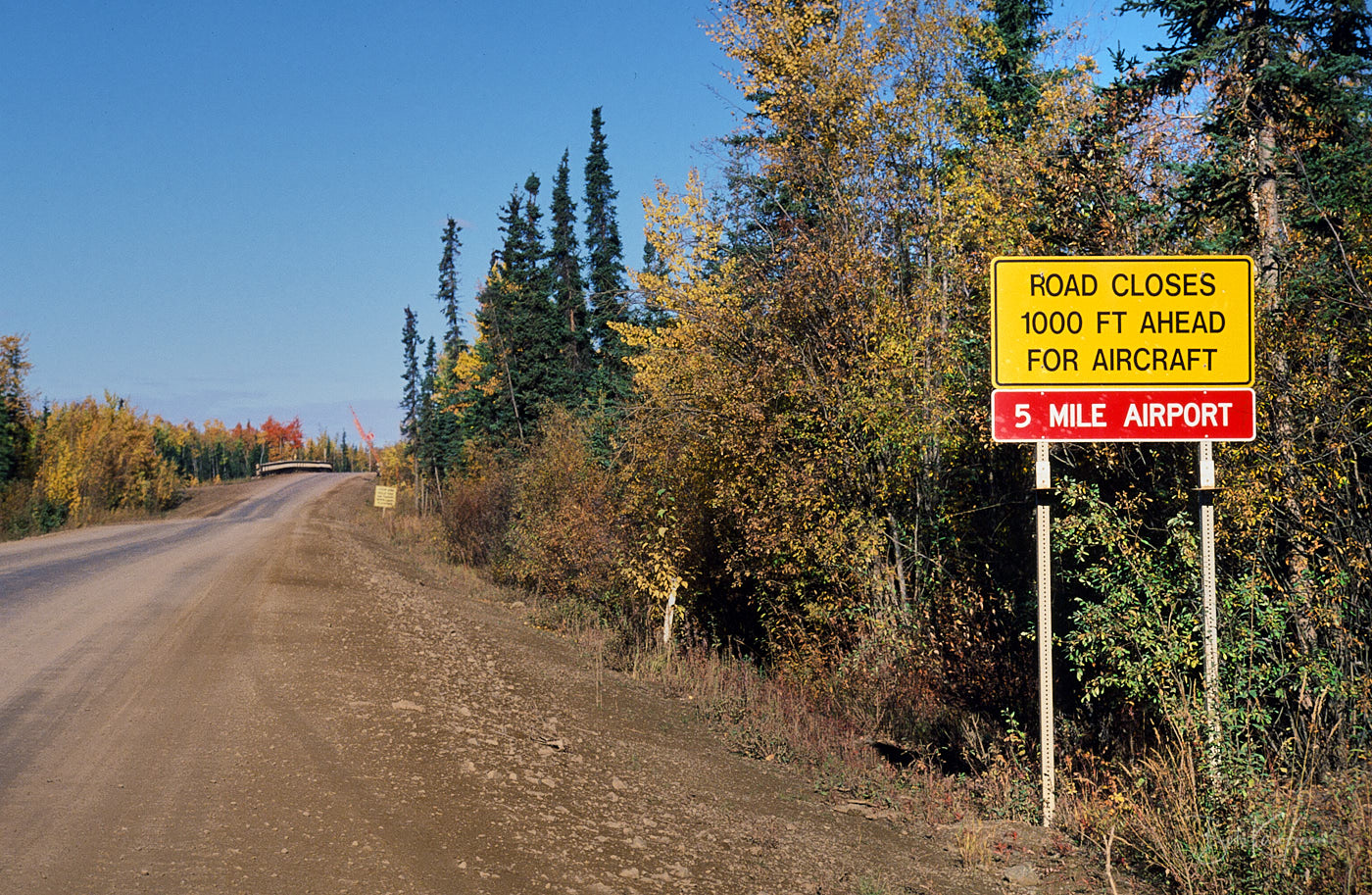 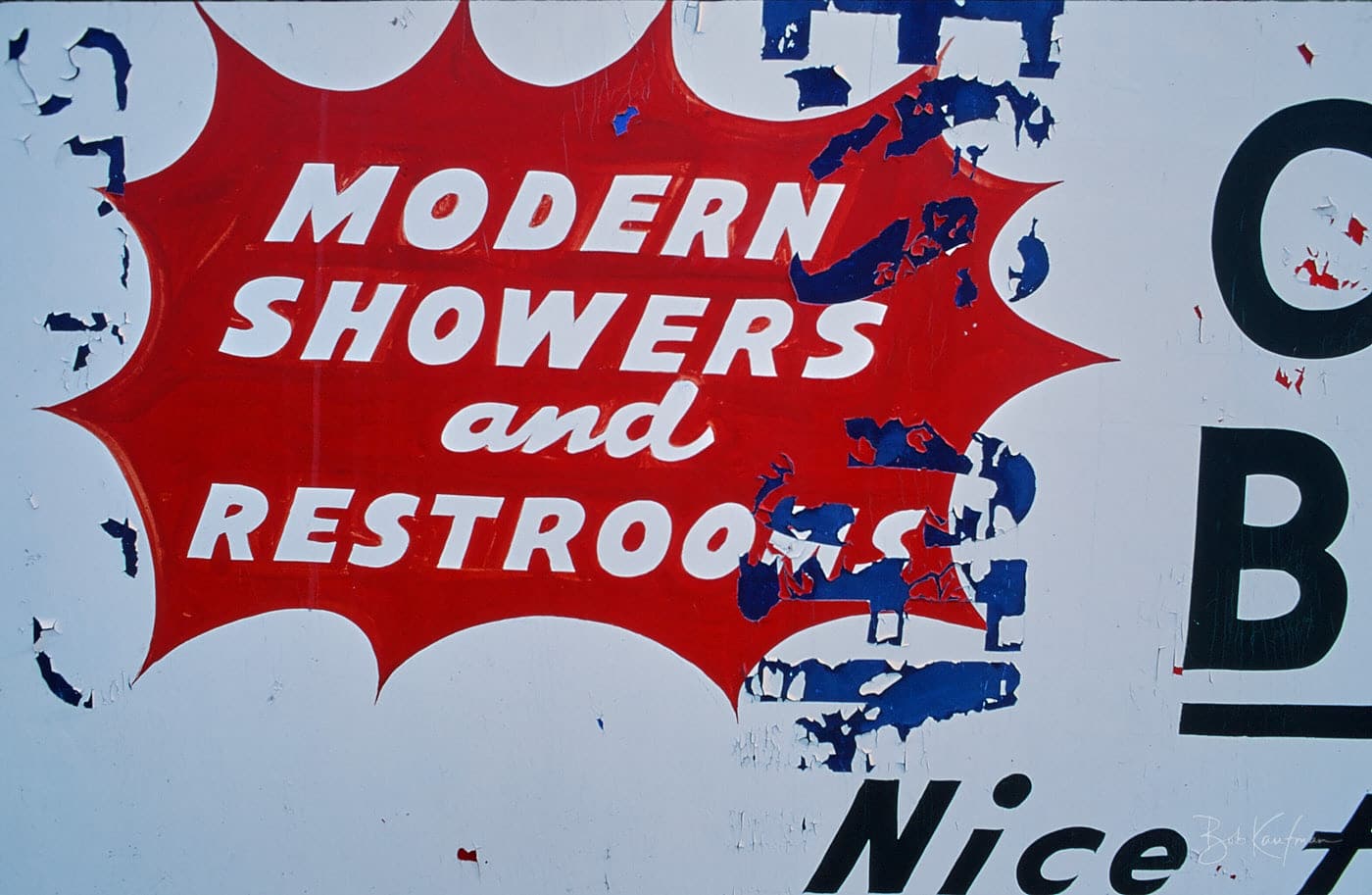 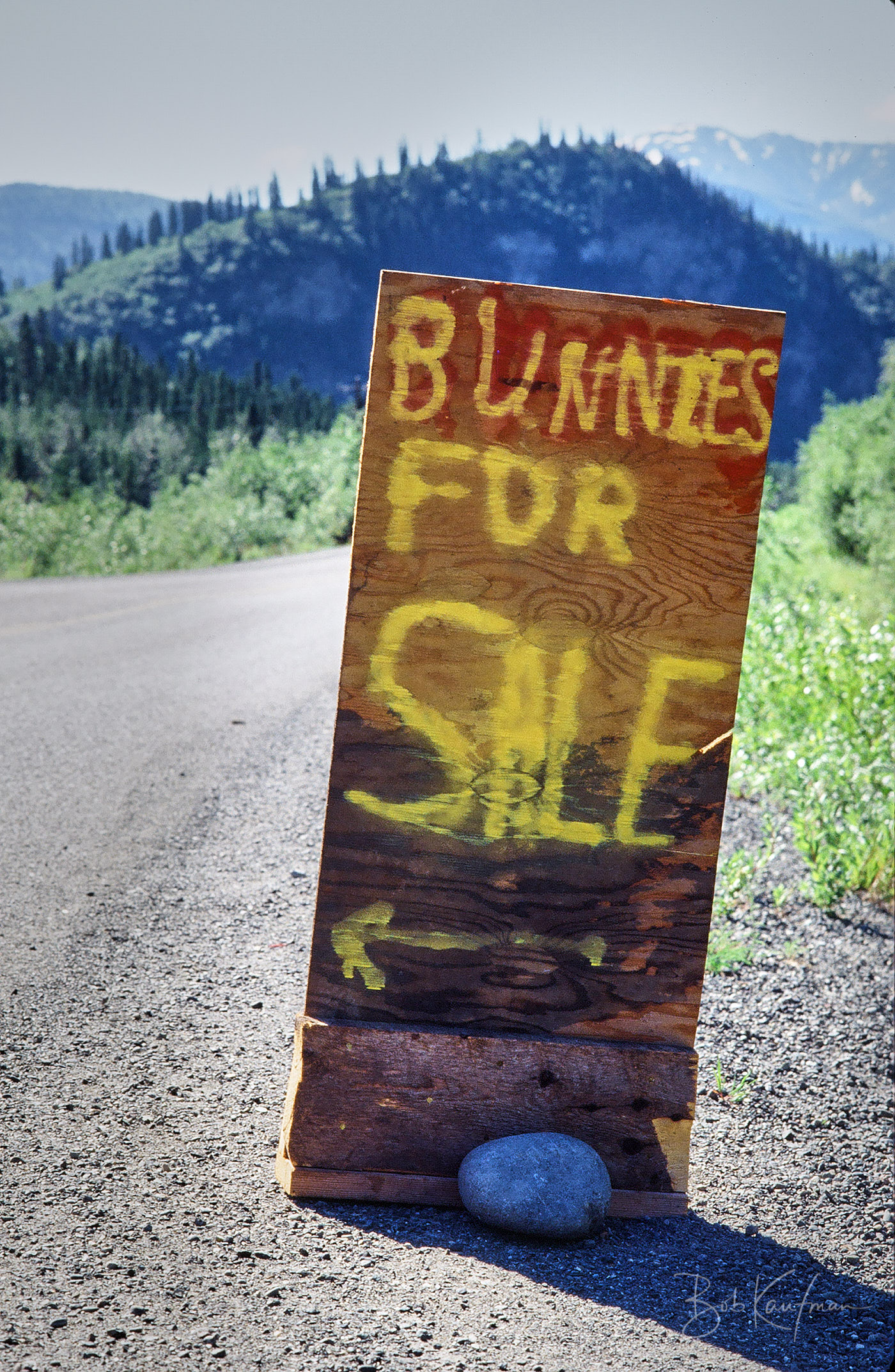