Retracing the Steps of a Gold Rush Prospector 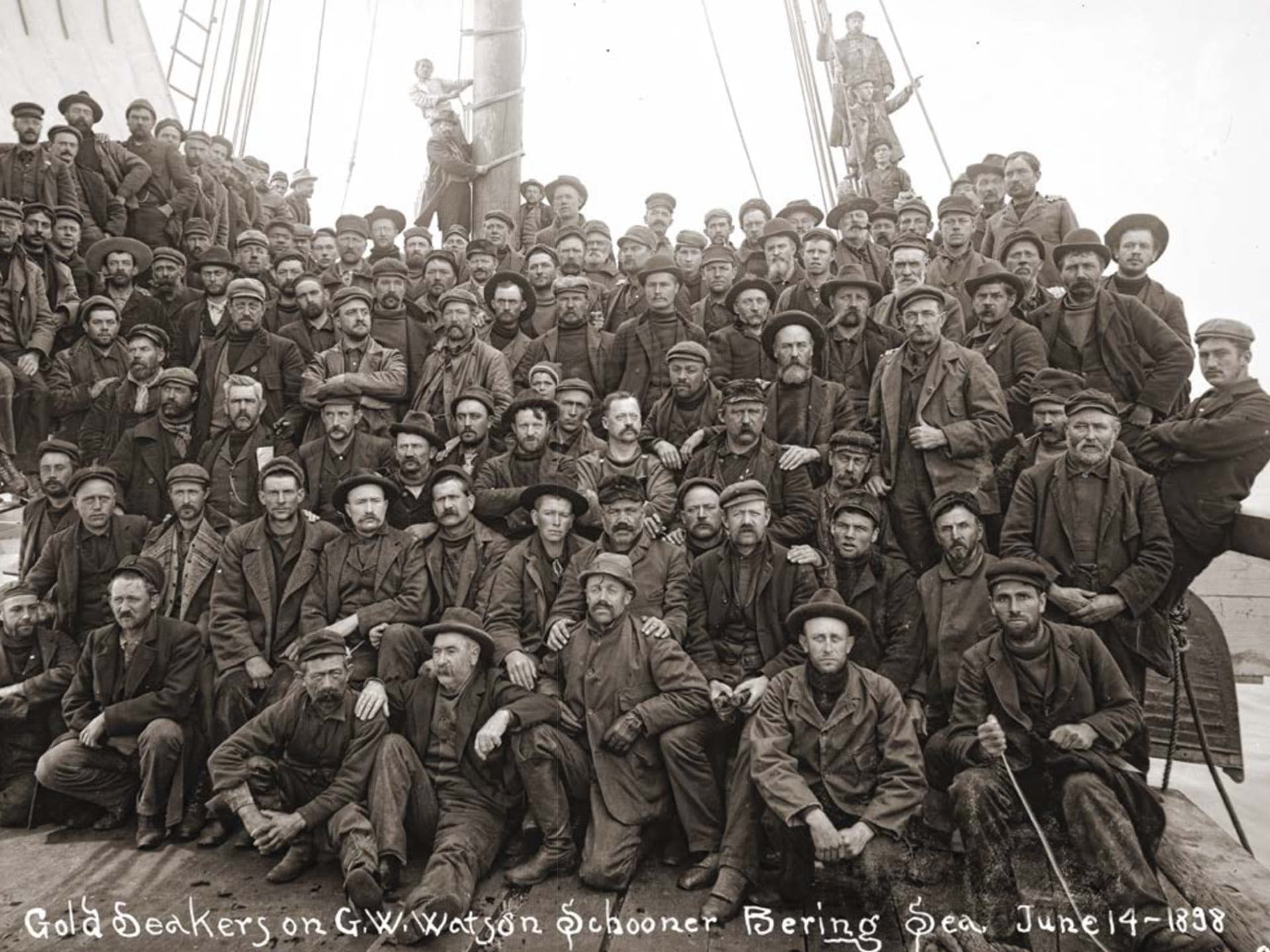 For many years, I personally scripted every TV segment we produced at Alaska Channel. Some required historical research.

Late in 1992, I found myself in the collections room of the Anchorage Museum when Dianne Brenner, an always helpful archivist, brought me a heavy box that had newly-arrived. It was stacked full of fragile glass plate photographs. A gold-seeker and photographer named Jasper Wyman had produced them during the Klondike Gold Rush.

Using a metal nail, Wyman etched into each plate a caption such as: “Steamer Taking on Wood,” “Return of the Hunters,” “Prospecting for Gold,” and “First Prize Fight Fought North of the Artic (sic) Circle.”

At the time, I wasn’t even sure there was a field called repeat photography. If there was, I hadn’t heard of it. But something about Wyman’s images called to me, especially those showing people.

An idea was forming…

The next summer, I hand-carried several dozen of the plates to San Francisco to make prints. And the following summer, in July of 1994, I set off for the Arctic to retrace Wyman’s footsteps. I was determined to locate these old places to find out for myself how different they looked—and felt—a century later.

As a repeat photography project, the undertaking was an unqualified failure; I recreated exactly zero images. But as a life experience, it was transformative. I learned something about why I myself had moved to Alaska. 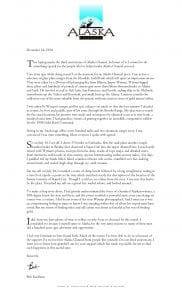 Letter I sent recounting my experience in the Arctic

That fall, as a Christmas gift, I shared my revelation in a heartfelt letter to my Alaska Channel hotel partners and sponsors.

I also created four plates, each containing a favorite Wyman image, along with an extended caption that I wrote.

(I still have boxes of these prints if anyone wants a set. But you’ll need to pick them up from our office in Anchorage.) 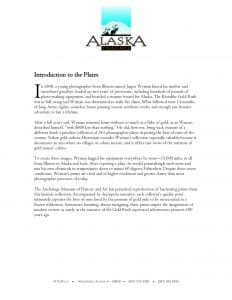 My introduction to the plates

“Tell inquiring friends who want to come to this country to bring their nerve with them and expect to take great chances.”
–Jasper Wyman 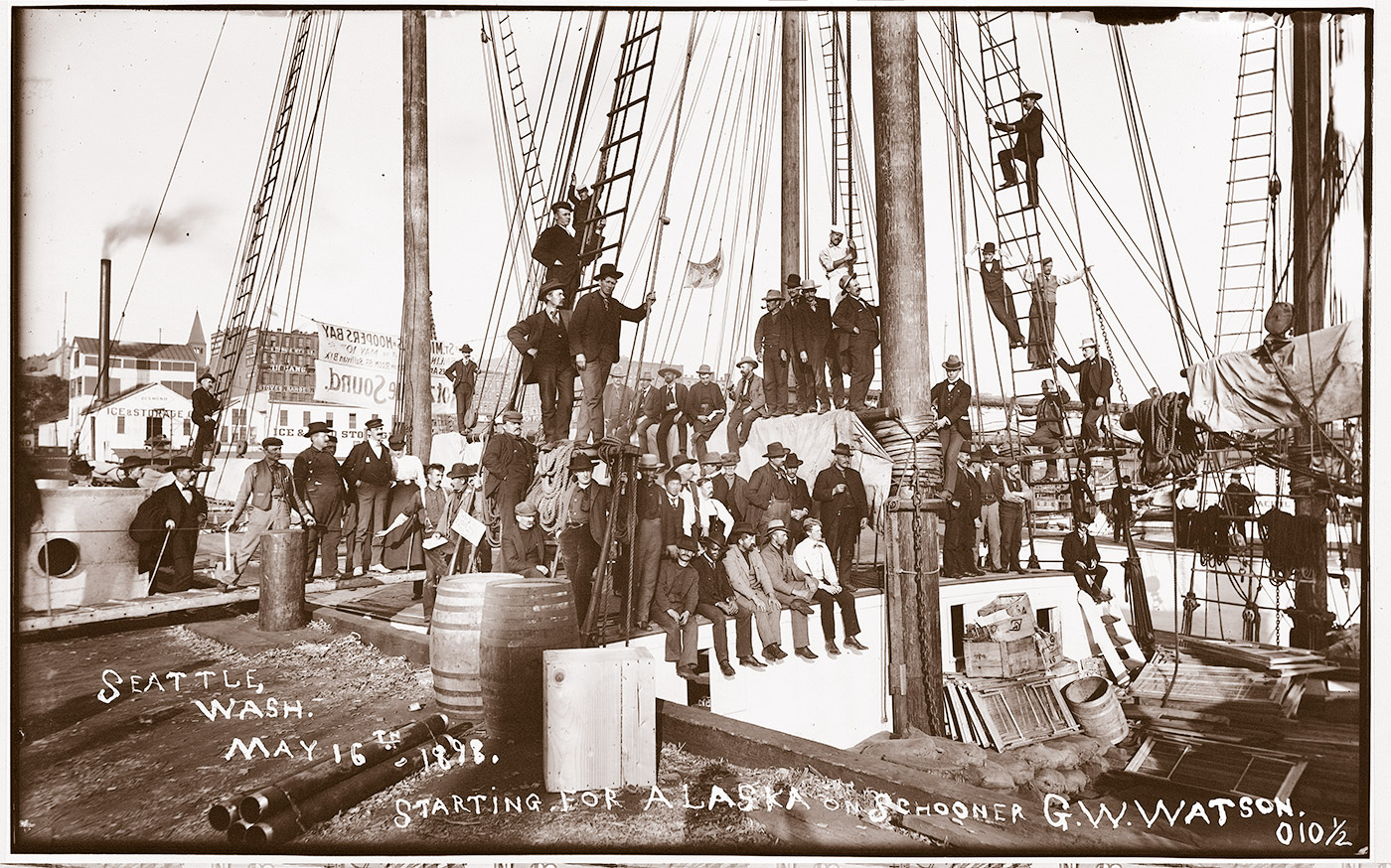 On May 16, 1898, five dozen men and a single woman jammed the decks of the G.W. Watson schooner for this photograph. They were off to seek their fortunes in the gold fields of Alaska. Little did they know, they were also about to embark on the greatest journey of their lives—and to play their part in one of the wildest, most improbable affairs in the history of North America: The Klondike Gold Rush.

Who were these men and women? It was not only the down-at-heel who went stark, staring mad at the prospect of instant and fabulous wealth, writes historian Pierre Berton. “Salesman jumped counters, doctors deserted patients, and preachers quit their congregations. The mayor of Seattle happened to be in San Francisco attending a convention when the news broke. He did not bother to return home, but wired his resignation.”

Among their numbers was a young photographer from Illinois by the name of J.N. Wyman. Wyman nor any of his party ever struck gold. Yet he was to return with a treasure more lasting: 367 glass plate images of the fevered dash for gold, now in the safe keeping of the Anchorage Museum of History and Art. Wyman lugged these fragile plates 15,400 miles to Alaska’s Interior and back.

Though these stampeders had no way of knowing so, even as they gathered on deck for this farewell photograph, they were too late. By the Spring of 1898, all the valuable claims had already been staked by prospectors who flocked to the Klondike from Fortymile, Circle City, and other soon-to-be ghost towns. Indeed, of 100,000 hopefuls who rushed the Klondike, only 400 ever struck it rich. 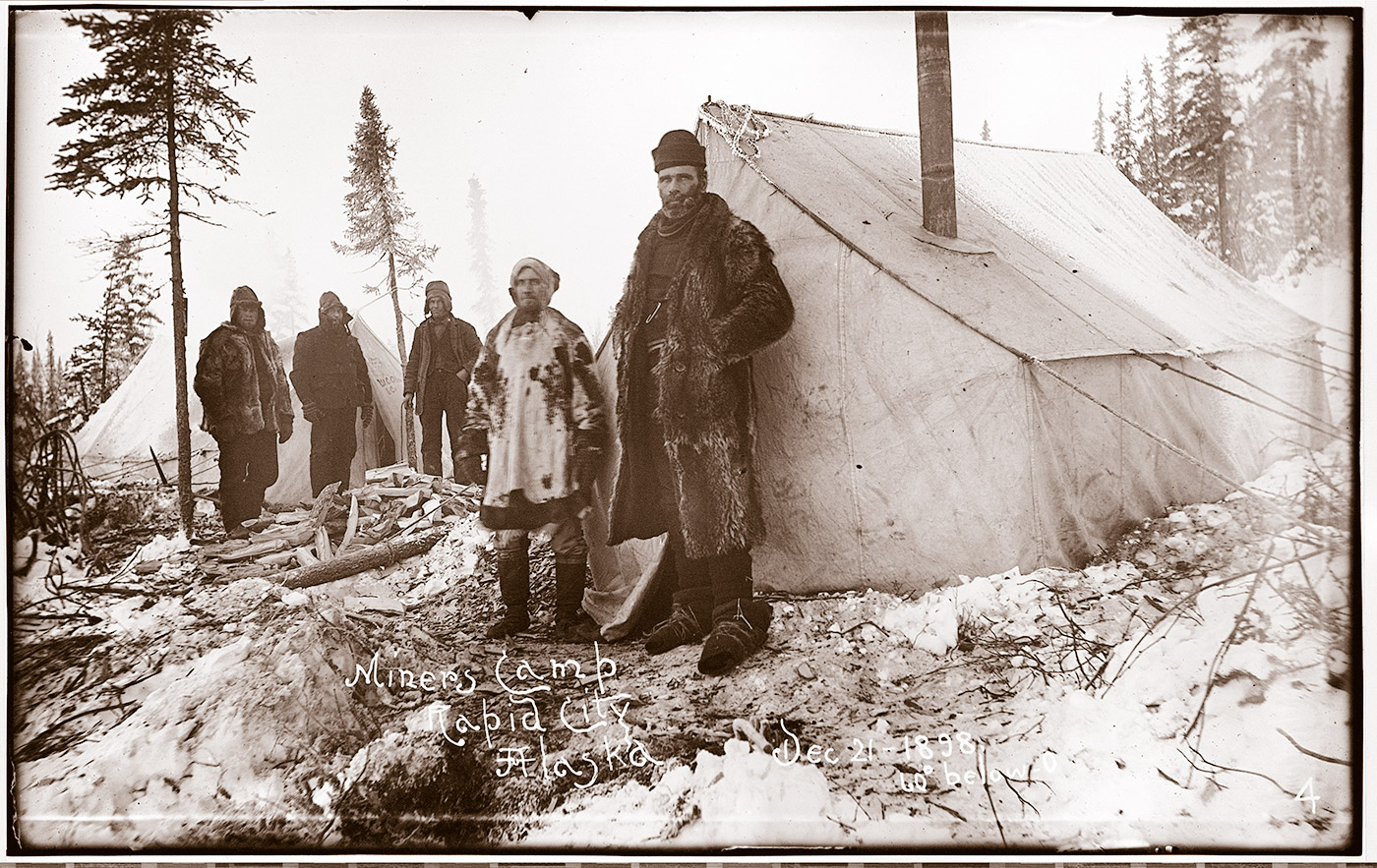 Rapid City is one of dozens of settlements that sprang up along the riverbanks of the Alatna and Koyokuk the winter of 1898-99. In addition to these wall tents, it contained a half-dozen cabins.

In July of 1931, the celebrated explorer Bob Marshall rediscovered Rapid City: “We entered the cabin in best repair. After thirty-three years, the roofs had fallen in as well as most of the walls. It gave me a queer feeling to see this simple equipment slowly rotting under the timelessness of nature, probably unseen by human eyes for many years…and yet to realize that for one endless winter it constituted the most intimate reality in the life of one lonesome person.”

In July of 1994, an Alaska Channel film crew retraced its way to the very location where Wyman captured this image 96 years earlier. The river has long since taken any cabin remnants. Little remains to mark the camaraderie, aspirations, and industry which Wyman and his men visited upon this riverbank nearly a hundred years ago, save a few ground depressions where cabins once stood and spruce stumps where sawblades once drew.

On the eve of the Gold Rush Centennial, Rapid City is a memory, an anonymous riverbank in the wilds of Alaska, the same as it has been since ancient times—but for one brief but spirited turn-of-the-century interruption. Caribou still roam its valleys, salmon still migrate its rivercourse, and the nearest settlement is still the village of Allakaket, 96 miles downriver.

Alaska’s Brooks Range is one of increasingly few places on earth which today looks exactly as it did a hundred years ago, a place which offers a rare glimpse of a great wilderness which once extended across North America. 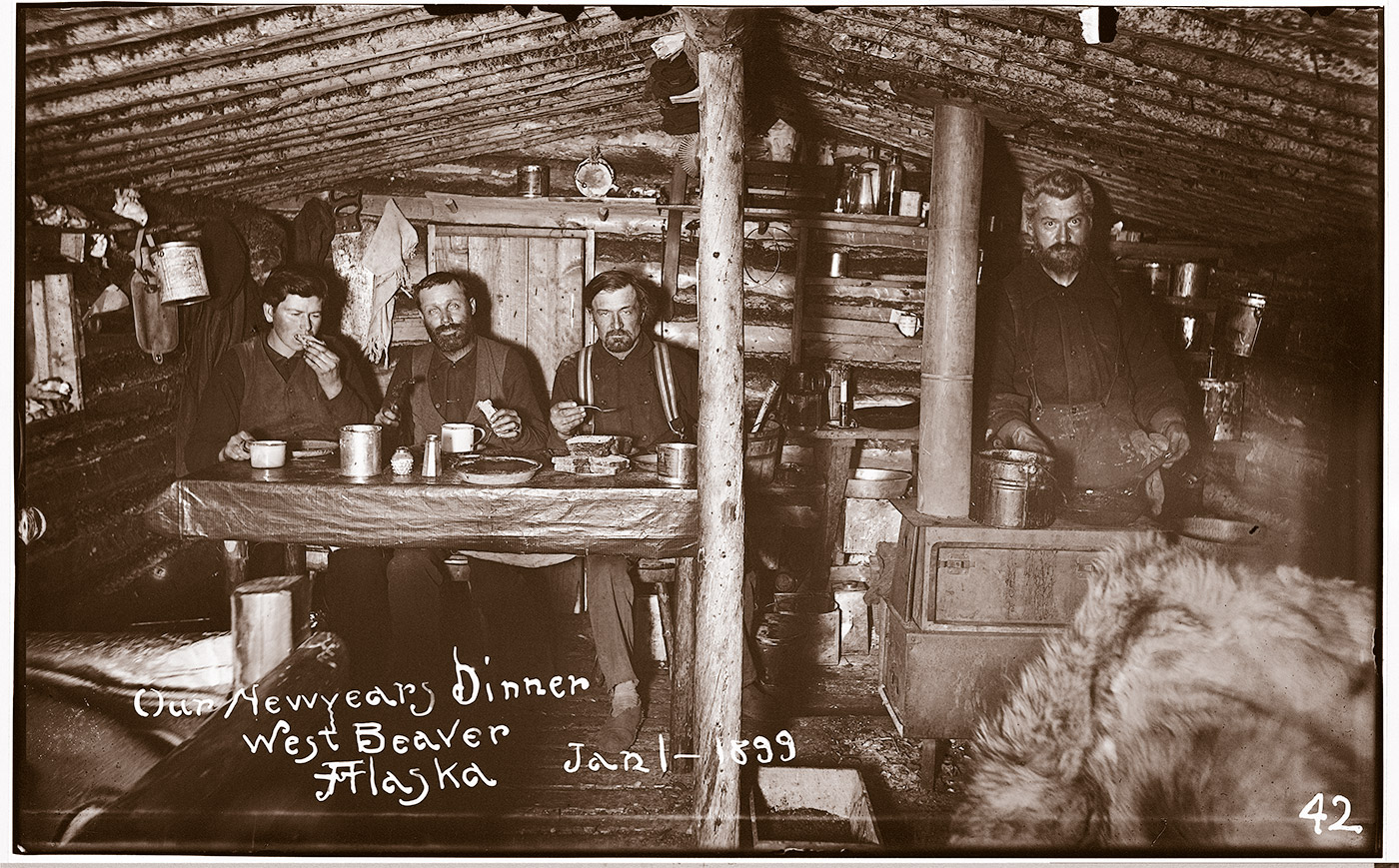 Imagine celebrating New Year’s Eve imprisoned in a dark and windowless 14- by 16-foot cabin with three other grown men, separated from family by 6000 miles of wilderness and three months of treacherous travel. These men have not seen nor spoken with their families for eight months. What few letters travel upriver by dogsled take four months to arrive, for the townsite of “West Beaver” lies on the Alatna more than a thousand frozen river miles from the mouth of the Yukon.

It is ten days past solstice in Alaska’s Brooks Range, a time when winter sets down like an iron vise. The mercury can hover for weeks at forty to sixty below, cold enough to make rocks give up and shatter. The long arctic night stretches on for days, dark enough to crush men’s spirits.
Eyes and facial expressions reveal dispirited men, unable to muster even a smile for their New Year’s Eve portrait. For them, the romance of the Gold Rush has soured. Failed in their quest for gold, longing only to return the comforts of home, they are incarcerated in a frozen wilderness fifty miles north of the Arctic Circle—and will be until May when the river ice breaks up.

Wyman, the photographer, is seated second from left, his remote shutter release cord concealed by bread in his left hand. After exposing the plate, Wyman would melt snow, carefully mix in chemicals, and develop his own plates.

The menu for their New Year’s Eve dinner consisted of soup, spaghetti, potatoes and gravy, bread, canned pineapples, pie, and cocoa to drink. This is one of the nicer Gold Rush cabins, with a boarded rather than dirt floor, a sloped rather than flat roof, and some side-peeled logs. 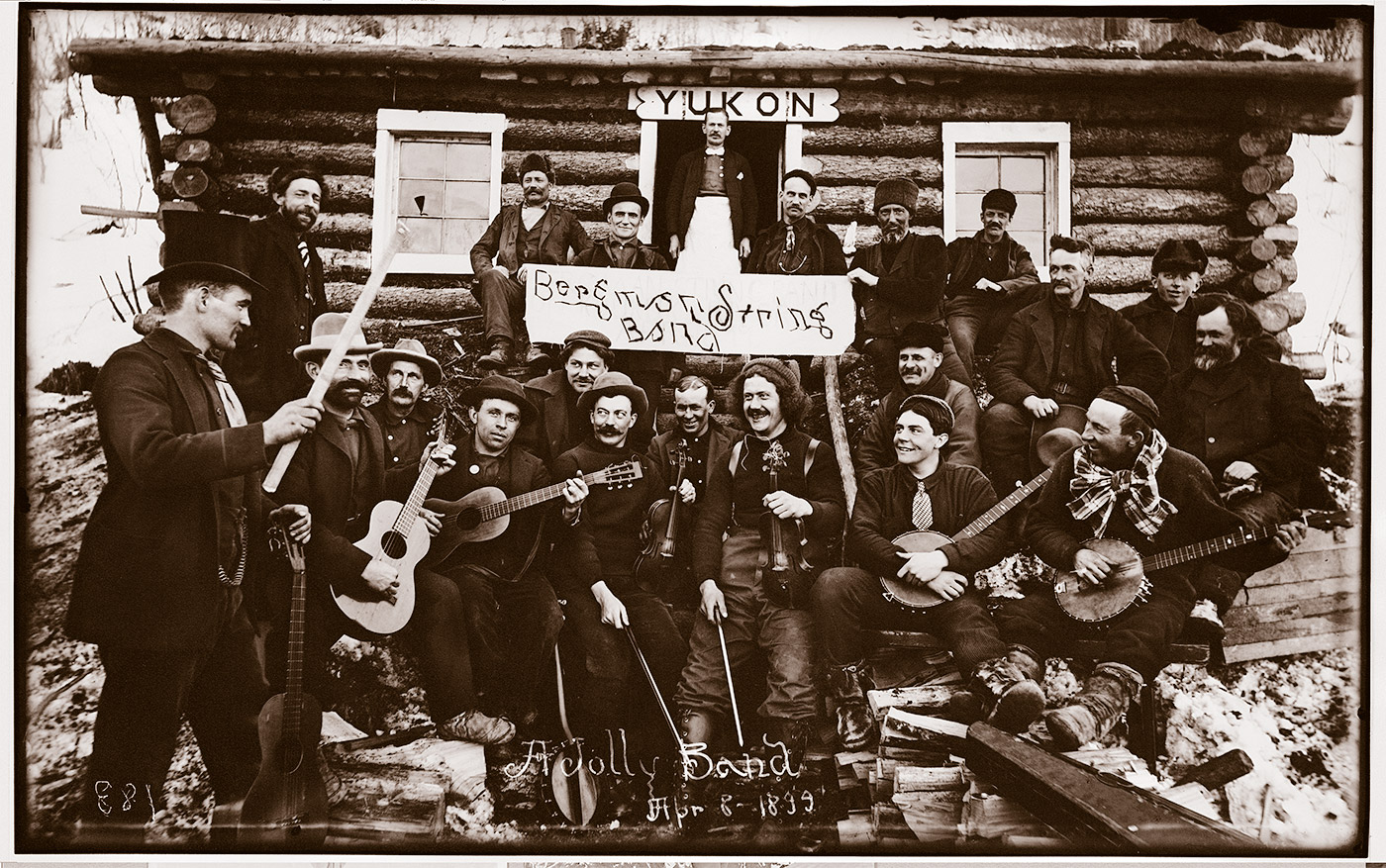 During the winter of 1898-99, the boomtown of Bergman Alaska sprang up on the banks of the Koyokuk River somewhere below present-day Allakaket. Historian William Brown tells of a raging heyday: “Bergman boasted a rough nightlife of whiskey drinking, fighting, wrestling, shooting out the lights, and shooting the cabin full of holes.”

The formation of this string ensemble reveals a little-appreciated quality of frontiers: the human striving for refinement and culture in even the crudest of outposts.

Historian Pierre Berton notes of Skagway: “There was a library with the complete works of Huxley, Darwin, Carlyle, Macaulay, Ruskin, and Irving. There were dressmakers with the latest Paris fashions, and an opera house with a troupe of San Francisco dance-hall girls—all housed in log buildings strewn helter-skelter along the Yukon mudbank, surrounded by marshland littered with stumps, wood shavings, and tin cans.”

The gaiety of this crew is striking. By April of 1899, these smiling faces have come to terms with the disappointment that they will return home without so much as a flake of gold for a full year’s toil, or as Wyman described himself, “with $800 less than nothing.”

Yet these are the faces of rich men, changed men who gained more in one year chasing their fortunes in the northern wilderness than most learn in decades. They learned of obstacles they could conquer, the value of friendship, and the rewards of following dreams.

Writing home, Wyman offered advice to the Alaska-bound equally valid a century later, “Tell inquiring friends who want to come to this country to bring their nerve with them and expect to take great chances.”